Some of the most successful startup players from Saxony, Germany, have one thing in common: they are supported by the German state-owned development bank KfW. Thanks to fresh insights of KfW board member Dr. Ingrid Hengster, we had the chance to see what the spirit around these companies feels like and what these ventures might account for in the future.

Biotech – About the Momentum

The definition of biotechnology is somewhat complicated: “Any technological application that uses biological systems, living organisms, or derivatives thereof, to make or modify products or processes for specific use“ (United Nations). The market conditions seem to be a bit complicated, too, as we’ll see later on. What’s easy to guess, however, is that this technology will inevitably change our daily lives.

One of these potential life changers is c-LEcta, a biotech late-stage startup from Saxony. While the German KfW was one of c-LEcta’s early-on supports, the majority of the company’s investors do consist of international parties today. This is true for the workforce of 70 plus employees as well, with many of them having an international background at the company’s executive and development level. As for the numbers, c-LEcta has collected 16 million euro in venture capital, grosses over 5 million a year, has 10+ products in development with over 200 customers globally, and holds as much as 115 patents. 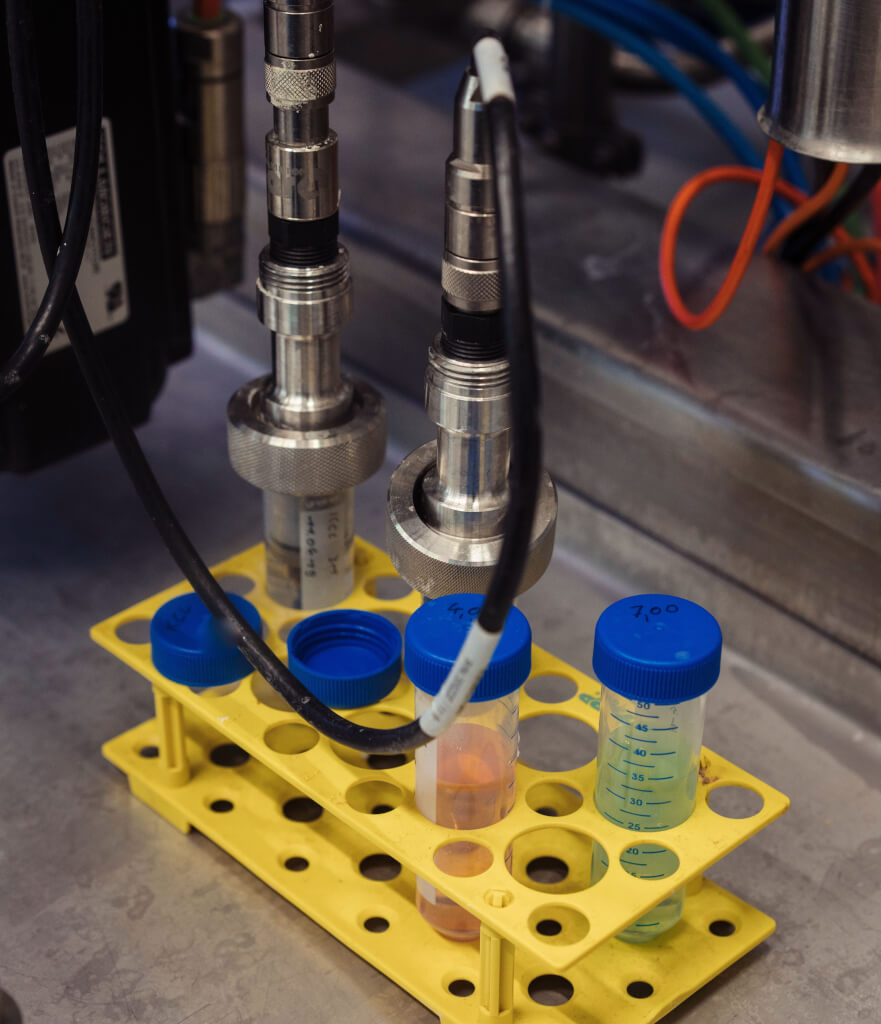 c-LEcta focuses on the food and pharmaceutical market and is a global leader in enzyme engineering. These little helpers – enzymes – work as catalysts for biological processes. The company tries to rebuild what is known from nature, mainly to replace chemical procedures. They develop samples on-site and screen for validation thanks to the world’s best bio-informatics-driven enzyme engineering platform. For scaling products, they team up with partners all around Europe.

The company is mainly producing transparent liquids and white powder. One of these white powders could become a significant factor for the food market very soon. It is a stevia derivate for sweetening, which is said to have the same effect but a better taste to it. Regular stevia is created by using microorganisms and has a somewhat metal-ish taste, whereas c-LEcta creates a natural high-intensity sweetener – RebM – using multi-enzyme cascade technology. Considering the soda market, the growth potential is extraordinary.

The biotech market conditions for food is not easy, though. New technologies face an overwhelmingly established industry to compete with. So, some say, it has already become a matter of political framework setting. After all, you definitely need a long-term commitment to the biotech business. Nonetheless, we will see some breakthroughs in the distant future, for sure. And maybe some more later on: Ever fancy to stop the process of aging?

IT – a Safe Thing

Information technology still seems to be a safe thing in terms of market prospects. IT startups that focus on the consumer market might have reached a bit of an investment peak right now. B2B solutions, however, are still considered to have tremendous growth potential. In this regard, Rhebo, another Saxony-based startup, seems to be a safe thing – at least its product: IT security for industry 4.0 and industrial IoT.

Rhebo is the leading European provider of industrial security and continuity solutions, securing facilities in industry and Critical Infrastructure companies against cyber-attacks, manipulation, and technical error states. The company’s name Rhebo derives from the element “Rhenium diboride“, a synthetic superhard material. That’s exactly what Rhebo’s industrial protector, a combination of software and hardware, does: hardening the IT infrastructure.

Rhebo’s solutions come into play whenever there’s a machine-to-machine-communication. So, it’s not about data protection but about protecting from sabotage and loss of production. So far, Rhebo mainly provides services for the critical infrastructure sector where it holds the dominating market share. The other industry sectors ought to be interested in protecting their production procedure as well to ensure a running production. Reality is, however, that there’s still a lack of awareness for the risks which these industries take every day – until the accident eventually happens. That’s why Rhebo started to demonstrate the benefits on-site, creating awareness for the lack of security, problems that could occur, how much there is to control, and how Rhebo would solve these problems. 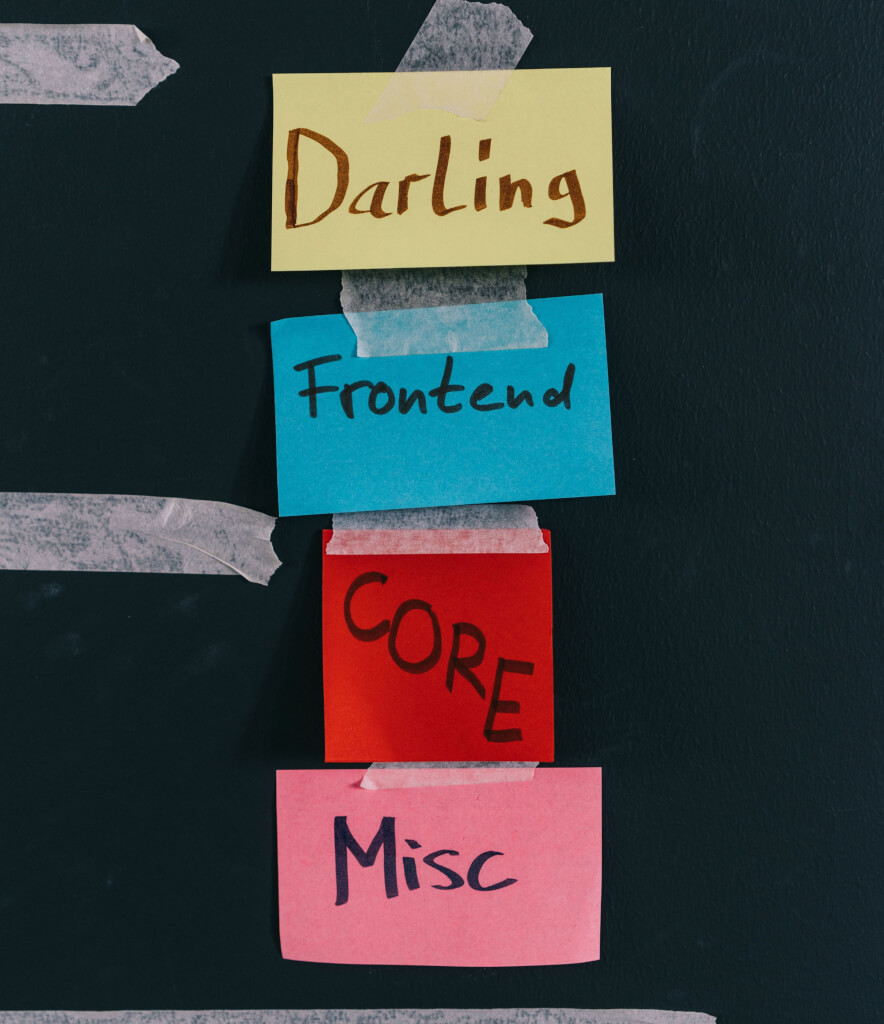 One of the key determinant factors of Rhebo’s procedure is agility. Agile communication and feedback processes lead to learning the client’s structures within two weeks and to developing algorithms for data reconciliation. After that, the industrial protector can reconcile and protect the system. If there’s any anomaly, the alarm goes off.

While it is said to be usual to enter the US market first, Rhebo and eCapital – one of its lead investors alongside TGFS, SHS Ventures, and VNG Innovation – believe, IT security allows for the other way around: start from Germany. The reason is that German companies already enjoy an excellent reputation for IT security worldwide. So, now Rhebos investment money flows into pumping up the marketing and sales activities for generating awareness that this matter and Rhebo deserve.

c-LEcta, Rhebo, and other successful startups from Leipzig, Germany, highly benefit from HHL Leipzig Graduate School of Management. Impressive enough, from Germany’s five unicorns at least one co-founder has graduated from that school. We were also able to visit the SpinLab – The HHL Accelerator which fosters various newcomers and startups in this area. Germany doesn’t have a silicon valley. There are several startup hubs spread across the country. Leipzig seems to be a very inspiring one, for sure.

Sponsored: Haven't heard of yet? Check out this first of its kind event on #BOECKBC2!

In an article just recently, I expanded on the global market perspectives of hydrogen and fuel cell technology (Hope for Hydrogen). So, we were excited to visit one of the world’s most innovative cleantech companies working on this matter: Sunfire.

Simply speaking, Sunfire provides modular and scalable technology for a clean environment of carbon-neutral transition, storage, and distribution of renewable electricity. When going into the specifics, however, we face sophisticated high-tech engineering of its kind. Sunfire and its 150 plus employees develop facilities to produce e-Fuels, e-Gases, and e-Chemicals as substitutes of fossil energy carriers. For this process, Sunfire uses solid oxide cells, in particular its world-leading electrolyzers, which can even utilize steam for a better degree of efficiency.

Sunfire’s key technology, therefore, is “PowerCore – a solid oxide cell (SOC) stack –for the production of steam electrolysers (solid oxide electrolyser cells, SOECs) and high-temperature fuel cells (solid oxide fuel cells, SOFCs). Steam electrolysis splits steam into hydrogen and oxygen. It is particularly efficient and is powered by renewable electricity. The hydrogen generated can be efficiently converted into crude oil substitutes via the Sunfire Power-to-Liquid process as well as being used directly in hydrogen mobility or industrially.

Solid oxide cells convert chemical energy from a gaseous fuel into electricity and heat via a chemical reaction with oxygen from the air, in a highly efficient, continuous process. Unlike conventional fuel cells, which only run on hydrogen, Sunfire fuel cells can also be operated with different hydrocarbons, such as natural gas, biogas, liquid petroleum gas (LPG) and various liquid hydrocarbon fuels (methanol, ethanol, diesel).“ (quoted from Sunfire official). 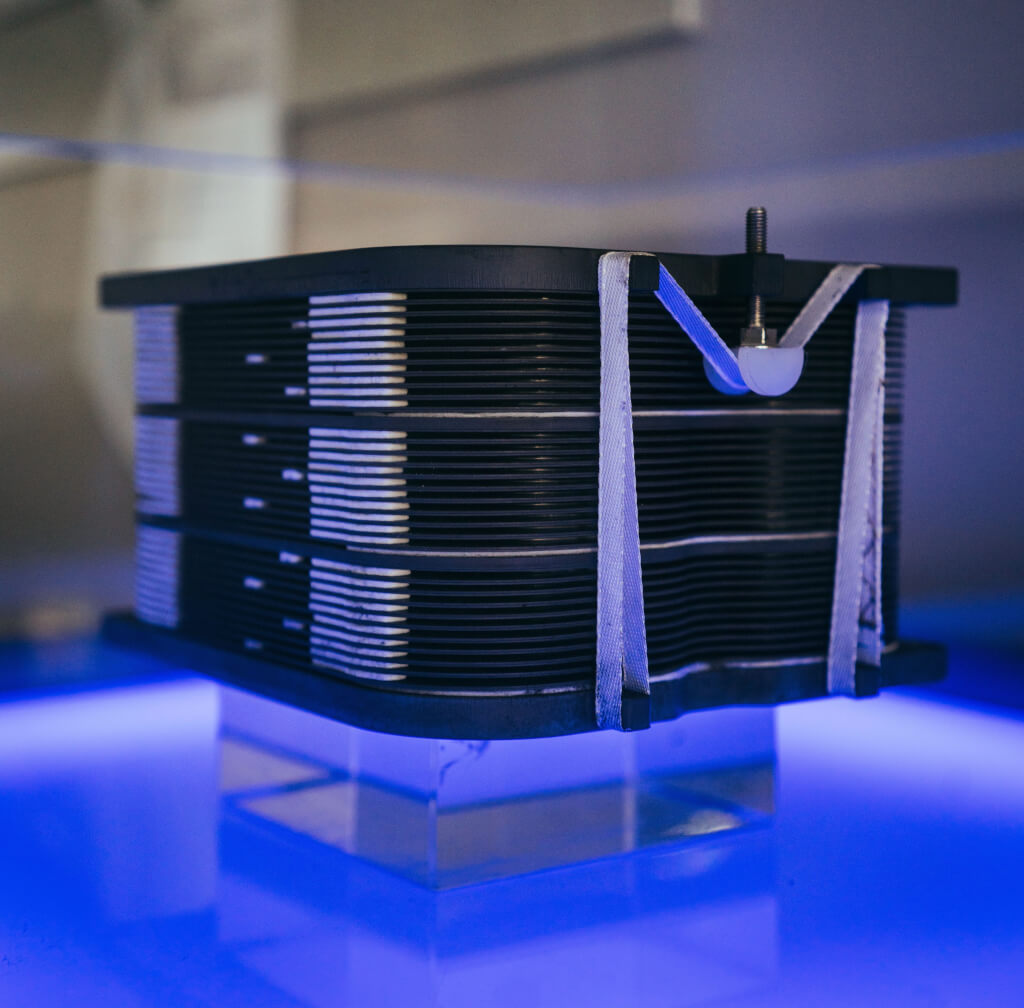 There are many industrial applications where crude oil and gas is required: steel mills, refineries, chemistry parks, cosmetics factories, and the whole mobility sector with cars and trucks, ships, trains, and even planes. One of this technology’s main advantages might be that you can use the already existing infrastructure. Not only the KfW believes in this technology – as first support of all btw –, there are also cooperations with Audi, Boing, ThyssenKrupp Marine Systems, and Total to support this technology. No wonder why Sunfire was able to collect another 25 million euro at the last financing round.

Hydrogen and fuel cell technology was under pressure to deliver on its promise for decades. Now, we witness an unprecedented momentum all over the planet, which allows for this technology to finally take off. So, Sunfire tries to push out prototypes and could materialize its technology advantages within a few years.

Last but definitely not least comes another brilliant idea: Transform the waste heat from data centers into energy and build an eco-friendly and highly secure data center for cloud operations of any kind. We talk about the successful startup-story of Cloud&Heat.

The worldwide demand for data processing rises exponentially due to 5G technology, VR & AR, the automotive IT, IoT, industry 4.0, and other energy consumers like blockchain technology. This costs energy and adds massively to warming up the environment. So, a green and secure solution for data centers and cloud technology is more and more needed these days.

Whether it’s Cloud&Heat’s Micro Data Center (MDC), its mid-size Data Center Container (DCC), or its large-scale Data Center (DC) – all base on an onboard water-system that allows both for cooling the data center and for heating buildings or feeding-in the heat into the network. If you now think, wait – water and computing don’t like each other very much, you are right. The danger of water sinking into the system, however, is taken care of already – of course, Additionally, there will be another safety valve for more redundancy and safety. So, people can relax and take a deep breath. 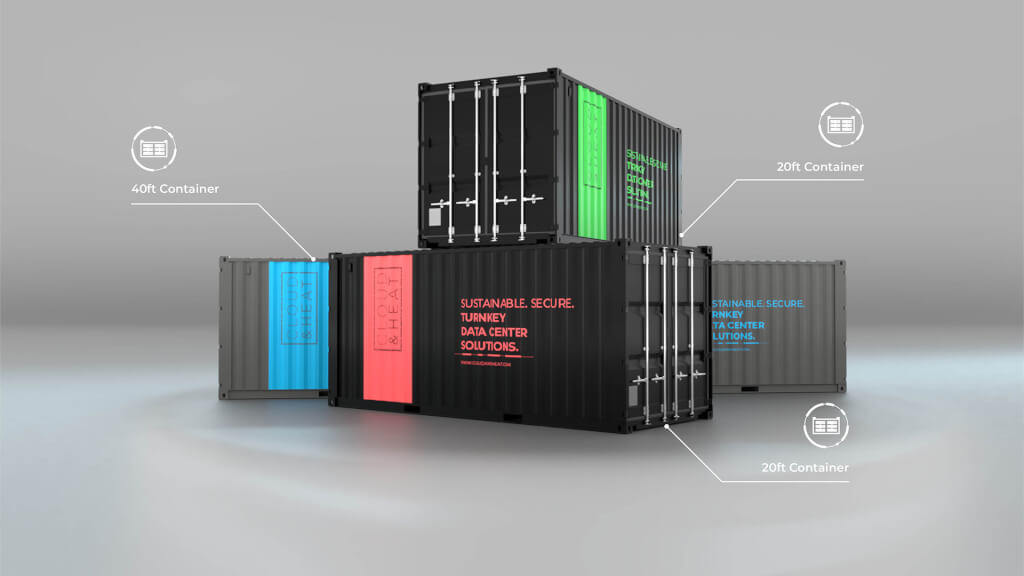 Cloud&Heat is highly supported by the VC company ETF Partners, which specializes in cleantech startups. That’s the reason why KfW Capital has invested in its ETF III fund. Next year Cloud&Heat will set up another financing round aiming for additional 30-50 million euro. It has successfully built a business network around the world from the US to Japan. Business opportunity matching a brilliant idea: Will Cloud&Heat become the next German unicorn?

As we see, German state-owned development bank KfW is a major player when it comes to supporting emerging technologies. To sharpen this focus, the bank has set up KfW Capital in 2018, allowing for responsible investments in VC funds. Supported by the Federal Government’s ERP Special Fund, KfW Capital will invest 2 billion euro within the next decade.

“KfW Capital invests in venture capital and venture debt funds, which in turn invest in young, innovative technology-oriented growth companies in Germany, thereby strengthening the capital base of these companies. KfW Capital is an institutional investor who invests up to a maximum of EUR 25 million and a maximum of 19.99% of the fund’s capital and voting rights.“ (KfW Capital official.) KfW Capital has invested in coparion, a 275 million euro fund, and the famous High-tech Gründerfonds (HTGF) as well. The private investment market is said to consider KfW Capital to be a strong sign for supporting the German technology landscape. So, let's grow!